Compared to the Garmin Zumo series, the TomTom Rider seems to be of similar dimensions, but overall, it’s a bit heavier and larger. Because of that, if you’re a biker and would like to get it, you need to be sure that you have no problem with getting a slightly heavier device. The TomTom Rider also comes with a sun-shade (built in) which allows you to view the display even in the brightest of days. On top of that, the sun shade also has the extra benefit of keeping the screen dry. If you want, screen brightness can be easily adjusted to suit your needs and the good news is that readability is furthermore enhanced by the powerful backlight screen and the many map color schemes used. 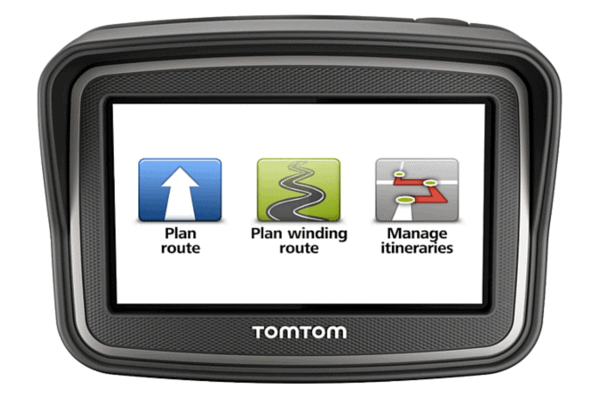 Taking a closer look at the TomTom Rider, you’ll realize it is built for the long haul as you would probably expect from a manufacturer such as TomTom. No matter how harsh you plan on riding your bike, you can rest assured that the device is going to work perfectly and not fall off your bike or anything like that. Like its most important competitor (Garmin Zumo series), the Rider is excellently equipped in order to deal with a wide range of operational and environmental demand and hazards. The device was thoroughly tested in order to be fully compliant with IPX 7 waterproofing standards and can also be used in any weather. On top of that, tests reveal that it can even be submerged in up to one meter deep water without experiencing damage at all. The TomTom Rider comes in matt black finish, is scuff resistant and has a glove friendly display.

With a great interface that’s a breeze to use and an intuitive and fairly simple menu structure, you don’t have to worry about getting lost in a confusing and endless hierarchy of screen layers. In fact, in just seconds you can find the functions you need and take full advantage of the incredible power and versatility of the device. Optional oversized keys are available, which seem to be really useful for those who want to operate the device while wearing their gloves. 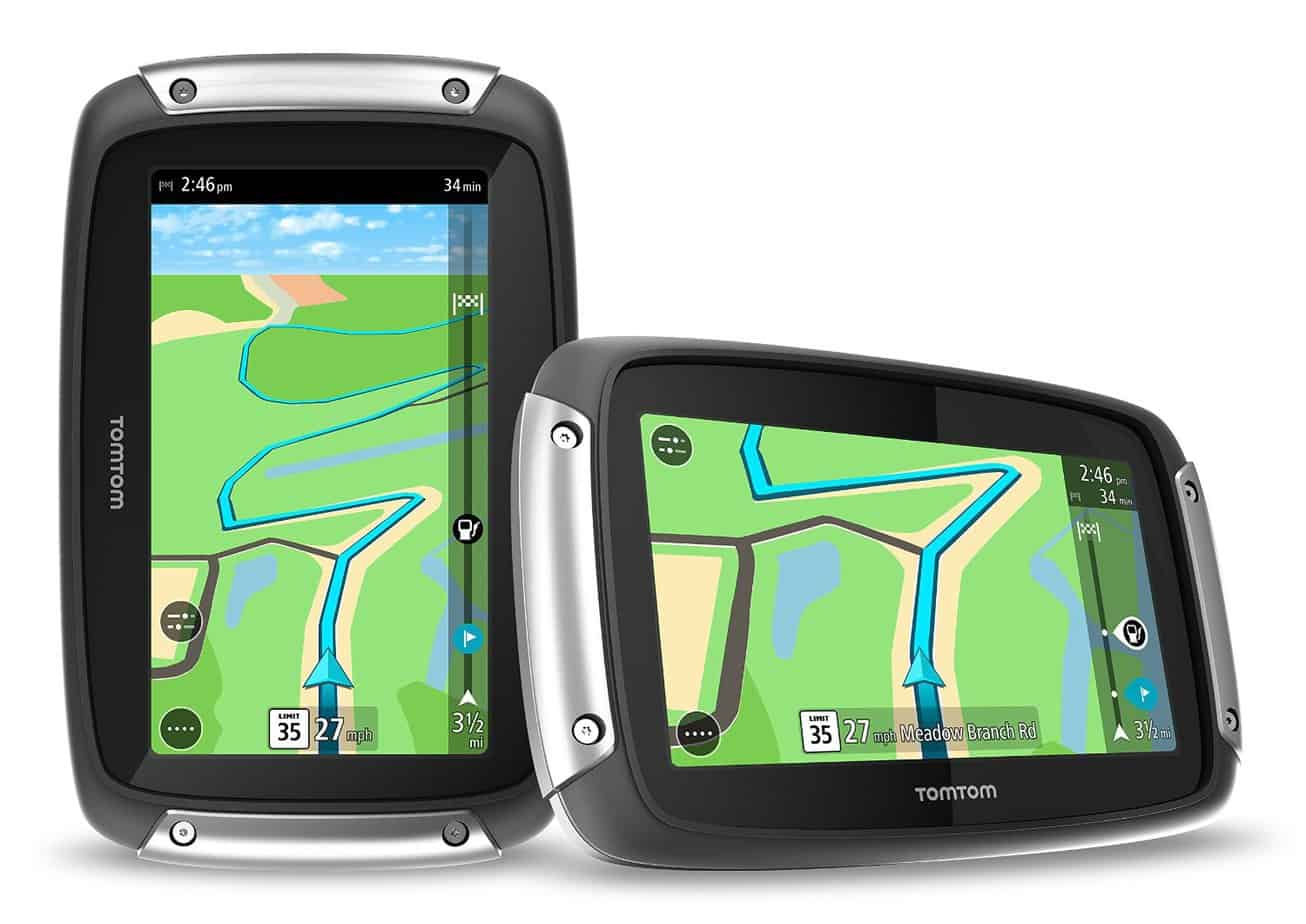 While the TomTom Rider is an overall great device, we cannot say that it is feature rich, especially if we are to compare it to similarly priced models on the market. But when it comes to the motorcycle GPS niche, it seems that it fares quite favorably with the rest and offers you exactly what you would expect for the price you pay for it. The features are usually going to be taken full advantage of by motorcyclists (since they’re geared towards them), with one example being the Winding Routes feature. Thanks to it, you can select your routes based on how winding they are.

Route sharing and planning seems to also be a feature that many motorcyclists appreciate a lot. Using it, you can draw custom routes and then share them with your friend and everyone else. Since it’s Bluetooth compatible, the TomTom Rider can easily connect to any device that has Bluetooth enabled, including your cell phone, helmet and headset.

If installing other GPS devices can be complicated and sometimes even quite risky to do on your own, that cannot be said about the TomTom Rider. That’s because installing it is a breeze and it can be done very fast thanks to the included RAM mounting hardware (which is vibration proof) and specifically designed to fit motorcycles in a wide range of positions. 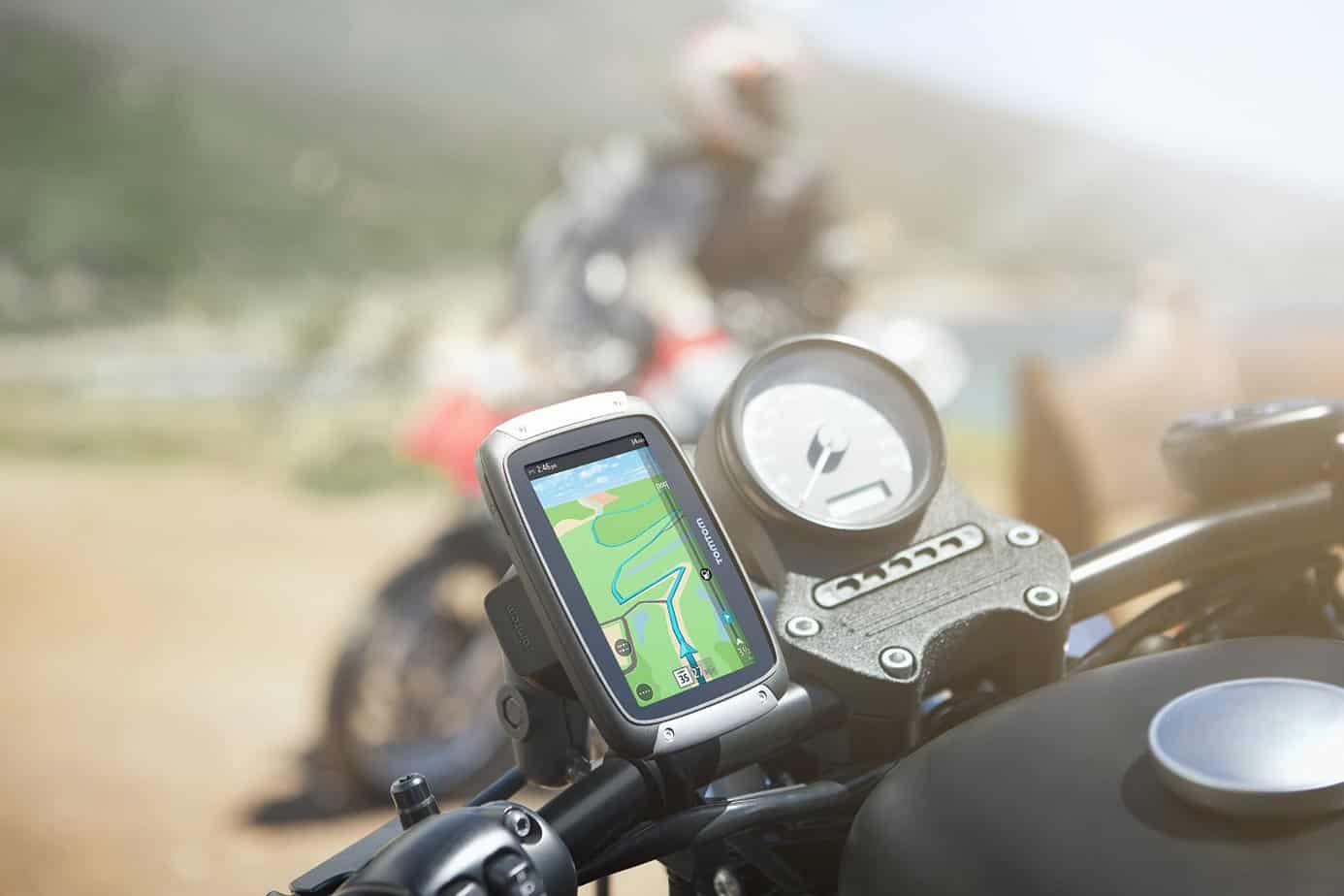 In the box you’ll also get a bike dock which you can use it in order to attach the device by using a self locking mechanism. Removing it from this mechanism is also very easy. If you install the power cable as well, then the TomTom Rider is going to automatically charge itself when mounted on the dock and is also going to be turned on and off with your motorcycle’s ignition. However, given the fact that the battery life is quite great (about 6h), some bikers may consider the use of a cable redundant.

The competitive price, great routing and mapping software and the rugged build quality of the TomTom Rider recommend it as a worthy and great contender to Garmin’s dominance of the motorcycle GPS segment.

We will leave you with this: