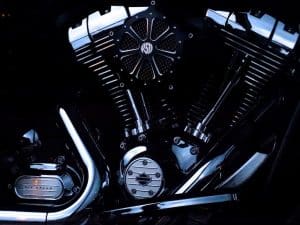 An important and essential part of Harley Davidson maintenance and ensuring that you get the most miles out of it as possible is by using the right motorcycle oil and changing it at regular intervals.

Oil is very important because it keeps the moving parts in your engine well lubricated and reduces as much friction as possible. The better lubricated your motor is, the longer your parts will last, because friction wears down the metal parts.

Not only that, but increased friction means less power output to the wheels, since a lot of the energy generated by internal combustion will be lost as heat just in overcoming the friction.

Oil also forms a protective coating around the metal parts which limits contact with oxygen, preventing oxidation, which further wears out the metal parts(akin to rusting)

One important thing to keep in mind is that motor oils are not one size fits all. Depending on the kind of engine you have, you will need a specific kind of motor oil.

However, since Harley Davidson is rather ubiquitous and they’re a single manufacturer, there are indeed some preferred oils over others.

Amsoil is probably the most well known and trusted brand of motorcycle oil for Harley Davidson. They have the stamp of approval from the biggest motorcycle rallies in the nation:

Amsoil is a very efficient synthetic oil, as it is able to reduce the engine temperature by nearly 40 degrees. It is an effective lubricant and keeps your engine parts moving smoothly and cleanly. It can be used in both the engine and the transmission, which is a huge plus point, and another reason it’s so trusted and used by motorcycle brands.

This oil is made with additives that inhibit deposits and contaminants from forming, especially under higher temperatures. No matter where you ride your bike, this oil is designed to provide better protection. As a result, you’ll have less damage and wear, and end up using less oil over a long period of time since you won’t be needing to change it that often.

Which brings us to the next plus point: Amsoil is very great value. People say you can use it for twice as long as other oils, but as I advised above, I would not push it that far and would still keep a check on the performance of the engine to gauge when to change the oil.

If you have a 4-cycle V-twin engine, Mobil1 synthetic oils are particularly well performing. The beauty of Mobil1 oils is that they maintain a very good viscosity even at very low temperatures. As a result, your engine runs smoothly right from a cold start. Because it’s so temperature resistant, it works well on the higher end of the scale, too, as it does not degrade under heat.

Mobil1 oils are designed with motorcycles in mind and are adept at handling shear stress, which – if unchecked – can cause the oils to become less viscous in top tier, high-demand engines. Like we mentioned above, the stability under a wide range of temperatures will also prevent the metal parts of your engine from oxidizing.

You can use Mobil1 oils in both the engine and the transmission.

Now that we’ve covered the two best oil companies, let’s look at which grades of oil are best suited to which bikes.

The best oil to use in Flathead engines and transmissions is SAE60. If you don’t have access to SAE60, you can use 20W-50 for the engine and MVT V-Twin synthetic transmission fluid for the transmission.

The best oil to use in Knucklehead engines and transmissions is SAE60. If you don’t have access to SAE60, you can use 20W-50 for the engine and MVT V-Twin synthetic transmission fluid for the transmission.

The best oil to use in Panhead engines and transmissions is SAE60. If you don’t have access to SAE60, you can use 20W-50 for the engine and MVT V-Twin synthetic transmission fluid for the transmission.

The best oil to use in Shovelhead engines and transmissions is SAE60. If you don’t have access to SAE60, you can use 20W-50 for the engine and MVT V-Twin synthetic transmission fluid for the transmission.

Generally speaking, you want to use synthetic oil only. There was a time that most people used natural oils but with the advancements in technology synthetic oil is a far better option.

Perhaps the main reason synthetic oil is better can be understood by two crucial factors.

The sludge will cause even more friction and issues in your motor. Synthetic oil has chemicals added to it which resist the contaminants so you can change the oil less often if you’re using synthetics.

Which synthetic oil should I get?

The reason oil thins out is pretty simple and can be likened to how honey becomes very thick and solid if it sits for too long, but heating it up makes it very liquidified again.

In the video below, you can learn more about motorcycle oil and exactly which parts of the engine it lubricates.