How Do You Identify Mikuni Carburetors?

The word Mikuni ought to be printed somewhere on the carburetor. It could be in small or large letters.

To distinguish Mikuni from Solex, note that Solex printed carburetors with a made in Italy, Germany or anywhere else in Europe sign points to the fact that this is not a Mikuni carburetor but a purely European Solex.

What is a Mikuni Carburetor?

Mikuni Carburetors are carburetors made by a company in Japan and used in Japanese bikes such as Hondas, Kawasakis, and Yamahas.

For those who own motorcycles, there are different integral parts that you need to invest in for your machine to function optimally. The carburetor, for example, is one of the most important parts of your bike. It heavily influences the throttle: the response and control that you have as the rider.

It has the power to improve throttle control which is desirable to the rider. A time comes when you need to replace your carburetor, adjust it or even rebuild it. You could leave the work to the professionals at the dealership or choose to do it yourself.

While there are tutorials on how to do this, the first thing that you need to identify is which type of carb you have. Once you have this covered, everything else will fall into place much easier.

What is special about a Mikuni Carburetor?

A Mikuni carburetor, like any other carburetor, is a mechanical device. It works in motorcycles to combine air and fuel within the internal combustion engine.

Its primary job is to control air flow into the engine. During this controlling process, the air pressure within the engine is determined by the speed at which the air enters the combustion engine.

The unique thing about Mikuni carburetors is that they are manufactured in Japan and consequently used in Kawasaki, Honda, Yamaha and other Japanese motorcycles.

Advantages of Having Mikuni Carburetors

There are a number of advantages to be enjoyed from using Mikuni carburetors. The first is that it drastically improves throttle response. It does work best with a stock motor.

Secondly, it is easier to tune and does not force you to pay extra to get a professional to do it for you as you can do it yourself.

Thirdly, it makes the motorcycle much easier to start which many enjoy. In general, the Mikuni carburetor drastically improves the performance of your motorcycle.

The only problem or disadvantage is that it has a ‘click click’ sound it makes when it is idle. While this is not a problem in itself, some people do not like this noise. To be fair, some motorcyclists actually like this noise and consider it a part of their riding experience.

Some of the Mikuni carburetors for motorcycles in the market include: 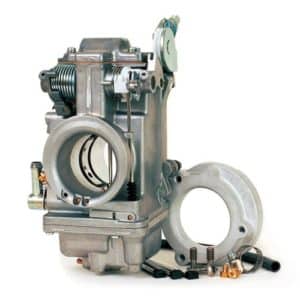 This carburetor promises to help your engine reach its full potential. The compact design fits like stock and employs a simple bolt-on application. It comes with instructions so you need not worry about being able to bolt it on. You do not have to pay a professional at your dealership just to install the Mikuni HSR 42 mm. This carb helps to improve the rider’s throttle control and also has an instant throttle response. This carb is compatible with all Harley Twin Cams from 1996 to 2006. It can be found on Amazon here. 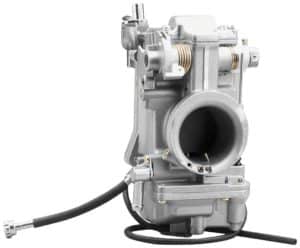 This carb is designed to fit a number of Harley Davidson motorcycles, from 1960 to 1999, some of which I wrote about here. It has a flat side throttle and roller bearings. It is available in 42 and 45 mm throttle bores that are supposed to be used with mild or highly modified engines and stock. The carb also has an accelerator pump technology. This technology allows the carburetor to deliver high quality performance from idle to wide open throttles. Additionally, the HSR 45 air cleaner, jets, cables and breather come in an aluminum finish. They are also interchangeable. The HSR 45 is available on Amazon here. 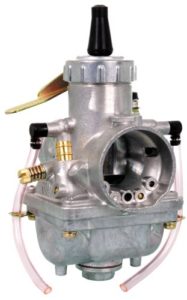 These carburetors, particularly the VM series, are popular in motorcycling sports. They are common in flat track and road racing on 2 and 4 stroke engines. One of the advantages of this series is that it features different bore sizes which riders can select from. The purpose of this is to match engine modifications by increased fuel mixture flow. It is compatible with the pit bike engine 250cc 2 stroke and the Honda 76 MT 250 among others. It’s available on Amazon here. 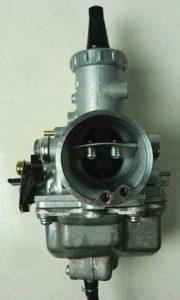 This carburetor works best on quad and dirt pit bikes. It brings about increased performance and power among other things. The Mikuni VM26 carb has a 30mm inner outlet diameter and a 42mm air filter fitting. Another important feature is the 48mm distance between the fixing holes. This high performance carb can fit a number of pit bikes including the 1982 Honda XL250R. The VM26 is available to check out on Amazon right now. 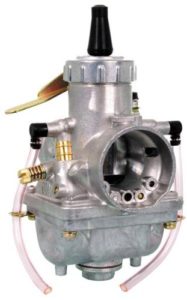 This carb works with a Honda XR/CRF engine ranging from 100cc, 200cc and 250 cc. if you want to see the horsepower in your pit bike increase, then this is the carburetor of your choice. It also increases the airflow in the bike. The 30mm carburetor fits bikes that have an engine similar to that of the Honda 200 250. Additionally, it works with a 44mm air filter and improves throttle response in general. 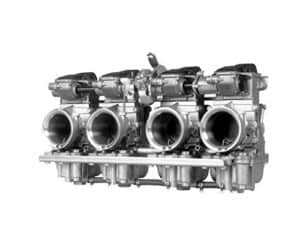 The RS series was created to meet the needs of road and drag race motorcycle teams. The 36mm along with other carburetors from the RS series has a radial flat side design which is optimal for maximum horsepower gains. It also provides an instant throttle response owing to its adjustable accelerator pump system. It is compatible with the 1998 Suzuki GSX-R11001986, 1990 Suzuki GSX-R750, 1977-1983 Kawasaki KZ1000A/J1981 and the 1979 Suzuki GS10001980 among other motorcycles. You can check out this bad boy on Amazon right here! 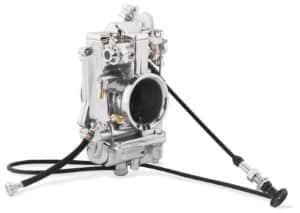 The Mikuni HSR48 is used with race and custom applications and is not for use with standard applications. It is custom polished for the Harley Davidson and uses the Harley’s cables in addition to coming with a Flange. Its finish is that of high polished aluminum and it helps riders and racers to realize the optimum potential of their custom race engines. Additionally, it is recommended for use in engines that are 120ci or bigger. These engines ought to have higher flow heads and cams for the Mikuni carb to be compatible. 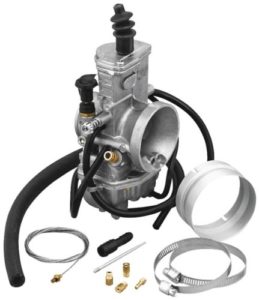 This carb (found on Amazon) fits two-stroke off-road racing and Motocross uses. It features the radial flat side throttle design for the valve. This works well to improve throttle response. It is also important as it increases sensitivity to tuning, which is a good thing. The carburetor is best placed in a 250cc racing engine. Smaller race engines such as the 125cc would do best with the 35mm bore size instead. 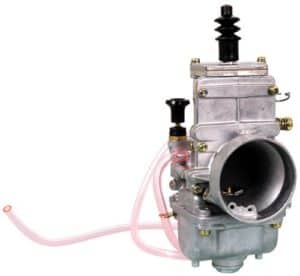 Like other Mikuni carburetors, the TM Series 33mm improves throttle response on motorcycles. The air flows faster in the TM series and the flat slide design blocks the jet helping to create a smooth bore effect. It is a dual cable carb and works on the Suzuki 97 DR350 bike and others, empowering them to run as though they are new although they may be significantly older. 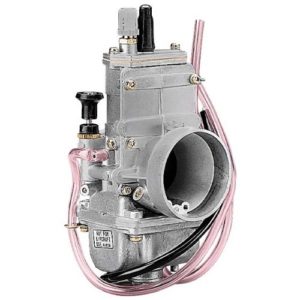 Like the 33mm, this 36-68 TM series flat slide carb lets air flow through faster. It improves on the throttle response and is compatible with the Kawasaki KLX250S 2009 although one would need longer cables. It also fits into the 99 KLX300 and is known to generally improve the running of the motorcycle.

There are a number of carburetors that you could opt for in the market. Each of these carburetors is from a well-known or hardly- known manufacturer. At the end of the day, it is upon you to decide which of the manufacturers appeals most to you.

Mikuni has been in the market for a very long time. The manufacturer has continuously provided Honda, Suzuki, Yamaha and even Harley Davidson motorcycle owners with the carburetors that they need over the years.

From various customer reviews, you can tell that customers are often happy with the product. Once it fits the bike, then praises are heaped on the increased throttle response and control.

Now that you have an idea about how to tell a legitimate Mikuni carburetor from other such as Solex, you can carry on to buy and/ or replace the one in your motorcycle.

It is best to check for compatibility before you pick any specific carburetor for your bike. However, with the Mikuni carburetors covered, you will be able to find something to suit your taste, preference and need. These carburetors are some of the best in the market and you should give them a shot.