Some of the links on this site are Amazon affiliate links. If you click on them and make a purchase, we may earn a small commission at no extra cost to you. Thank you for your continued support!

These helmets don’t cover the entire face. Instead, they rest on the crown of your head, come down to your eyebrows, and extend a little bit back out above the nape of your neck. 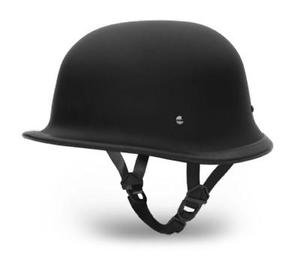 Modern German-style helmets are made of tough polycarbonate or carbon fiber material, and although they may seem unsafe at first glance, there are actually DOT approved models available.

The street names for this kind of helmet include Shorty, Skid Lid, and Skull Cap.

The inside of these helmets have a comfortable padding – after all, what use is a helmet if the plastic directly transfers the force of the impact to your head! The padding greatly filters out the impact and lessens the potential damage that can be done.

German motorcycle helmets are more common with choppers and hogs – you can almost picture a Harley-riding biker going down the road on a summer day wearing jeans, a leather vest, and a german helmet! 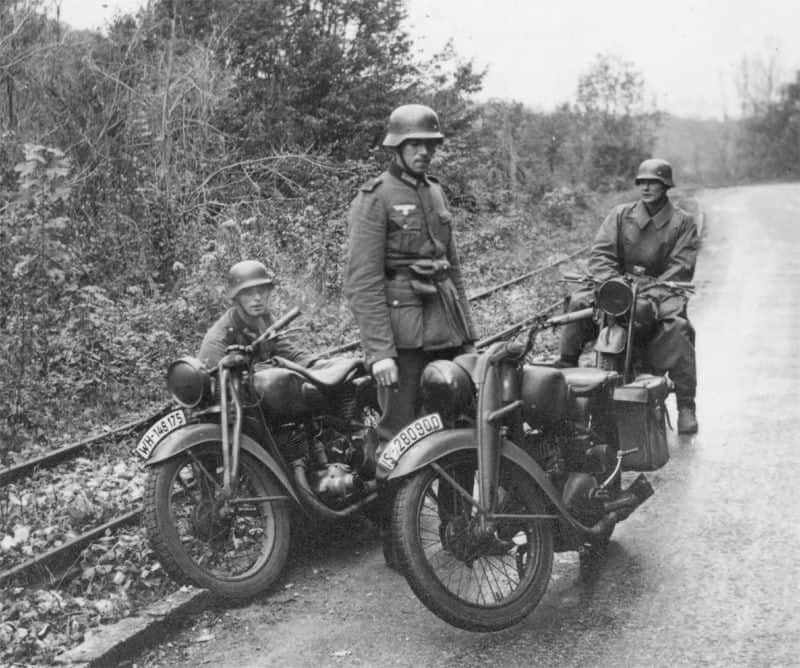 World War II saw extensive fighting all over the globe – the scale of fighting was unprecedented and troops were mobilized on the ground, the sea, and in the air.

Ground troops needed an effective mode of transport – four wheelers were good, but limited as far as the places they could access. They needed wider, clearer pathways and were not able to handle very extreme terrain. That also slowed them down quite a bit.

Motorcycles, on the other hand, were perfect for zipping around here and there – they were a quick and dirty way for soldiers to get from one place to another regardless of road conditions.

One of the most powerful and impactful bikes made by Germany in WWII (there’s no question that the Nazis were able to produce some terrifying and awe-inspiring wartime tech) was the BMW R71. It was fast and mobile on European battlefields, and when the fighting spread to North Africa, the BMW R71 performed flawlessly in the Sahara desert sand.

Allied bikes, on the other hand, quite struggled!

Even since WWI and WWII, people have had a good idea of the fact that a helmet is an absolutely necessary accessory when riding a bike – as evidenced by this helmet design.

Today, these helmets are worn because they look cool and remind us of the glory days of motorcycles, when some truly amazing bikes were made.

The German helmet design was quite unique compared to others, so they became the symbol of WWII motorbike nostalgia rather than other helmets – even though it was a Nazi regime that developed these bikes and possibly these helmets, today’s use is far more innocuous and only fashion-centered in intent.

Anytime you see someone wearing this style of helmet, they really catch your eye!

So who likes to wear these helmets, anyway?

No doubt, those helmets offer a lot more protection than the German low profile ones. Still, a lot of riders are fashion-conscious and many people prefer to wear the German style helmet.

These helmets are more popular with folks who ride Harleys and choppers. The long, stretched out bikes with high handlebars, a laid back seat – something that most people would picture in their minds when they think of the word “biker”.

This image of bikers has probably been popularized thanks to the multiple pop culture references to Hell’s Angels and biker gangs.

The helmets are wider on the sides and slightly narrower front to back, as is the shape of a typical human head, but if you have a very round head, these helmets will still work because the padding compresses and creates a snug fit.

Please refer to the size chart below for more information.

We highly recommend that if you wish to get a German motorcycle helmet, you should use one that is DOT certified. DOT standards are basic safety standards that the Department of Transportation has ruled must be present in certified helmets.

There are non-compliant helmets available, too, but they will not match the same safety standards and wearing them will pose a huge risk to your safety. This is why our reviews will only be of compliant helmets, and no others.

DOT certified helmets will have a special logo on the back of the helmet, in an effort to curb counterfeits.

Manufacturers are supposed to test the helmets for compliance by themselves, and the compliance is kept in check by the department acquiring random samples and testing them. 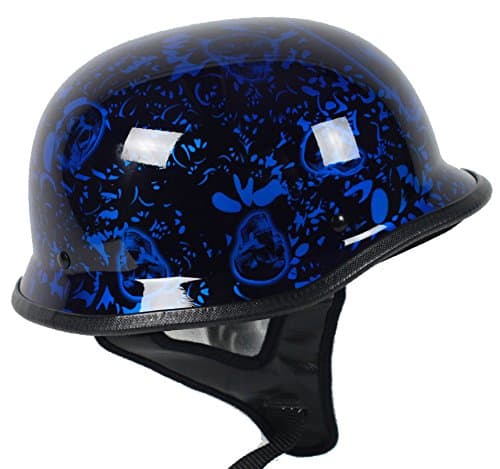 This helmet weighs right around 30 ounces and is fully DOT compliant so you can be assured of safety when wearing this helmet on the road. The shape of the helmet is German military style, but with a unique twist on it with skull graphics.

There is a one inch liner inside the helmet and stainless steel rings support the chin straps.

If you have a smaller head, you may feel like this helmet is a little too big(even if you get your size) – the wall of the helmet is rather thick and may look strange on a small person’s frame. 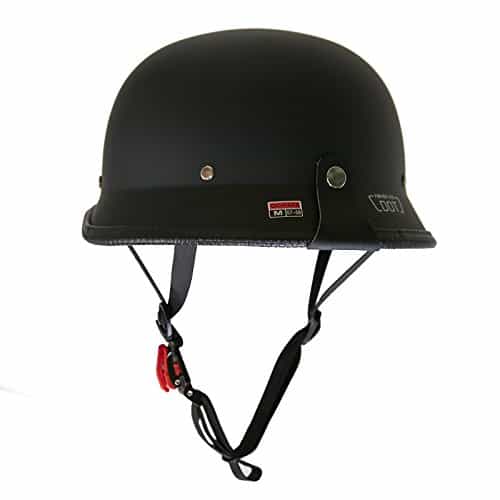 The Nuzari helmet comes in a neat, matte-black finish that will look really nice and sharp on your head. The outer shell is made of durable ABS thermoplastic, and the inside is made with EPS. These two substances are chemically resistant, water resistant, and most importantly, impact resistant to protect your head.

The buckle strap is very strong and will make sure that the helmet stays on your head in case of an impact.

The inside padding is made with a breathable, moisture-wicking material so you don’t feel too sweaty under the helmet. The inside cushioning is moderately soft – some helmets have much softer cushioning.

Since this is an open-face helmet, there will be plenty of ventilation from all the air rushing on your face! It’s a good idea to wear goggles or glasses if you don’t have eye protection. 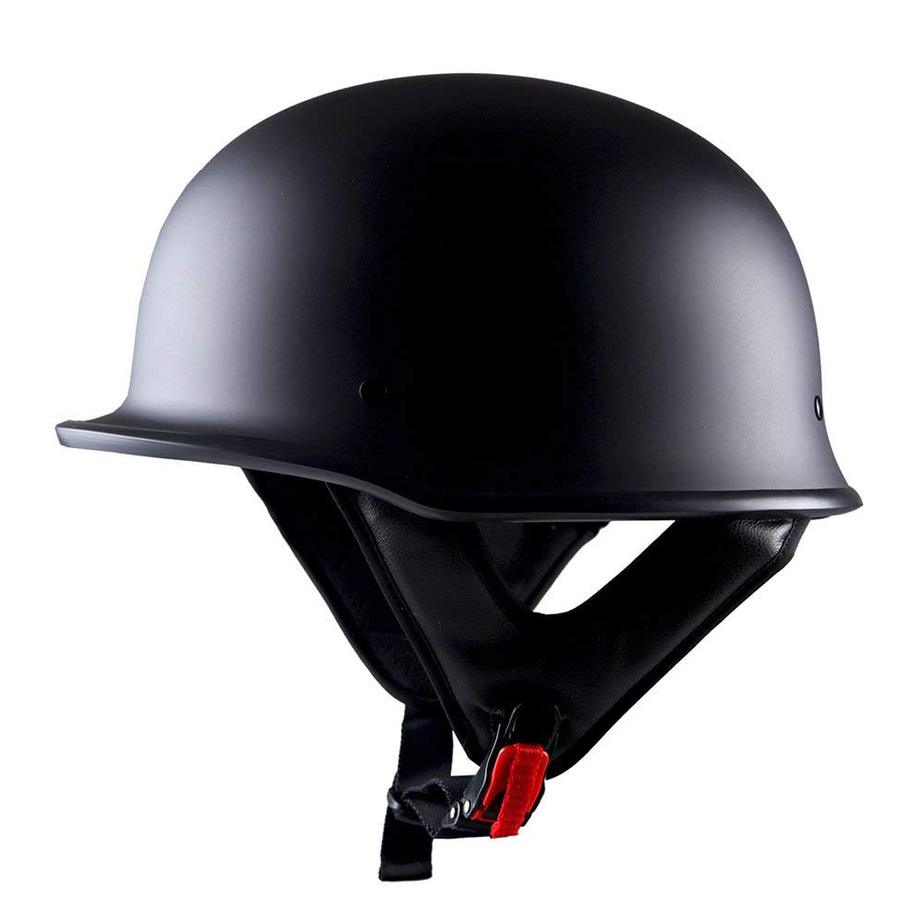 The 1Storm helmet is like most of the others in this list, except one feature that really popped out at me was the fact that the inner fabric padding is fully removable and washable.

After some use, the padding will inevitably begin to give off an odor and the ability to wash it is great.

Other than that, you’re looking at a neat, DOT approved half face(up to the brow) helmet made from tough thermoplastics for proper head protection.

For the most part, the sizes are spot on and the helmet is a very comfortable fit. The front of the helmet does come down quite low so if you have a small forehead you may see that the helmet is touching the bridge of your nose. 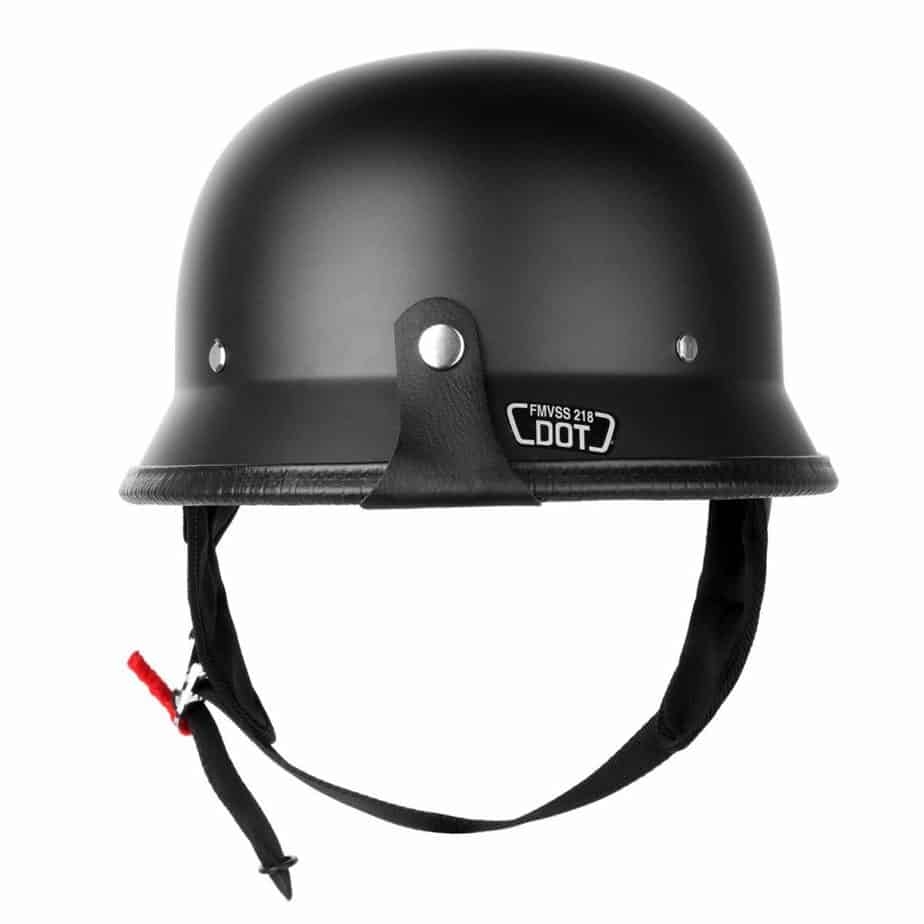 This DOT approved low profile helmet is UV protected, which I am not completely sure means as far as helmets are concerned!

The shell is made of strong ABS thermoplastic and nylon Y strap is easily opened, closed, and adjusted to ensure a tight fit on your head.

It’s a very lightweight helmet which makes it ideal for scooters or touring – although I would not recommend using it on a sport bike! You’d probably look very strange, ha!

This helmet is a lot more low profile than the other helmets we’ve listed, so of the lot, this will look the sleekest on your head.

There are some sizing discrepancies, though, where the helmet seems to be a bit too big for user’s heads. It may be wiser to get one size smaller in that case.

The straps are also hit or miss and you may find that you have to replace them very soon.