If you love motorcycles and bikes, you would surely love Sons of Anarchy. Sons of Anarchy, is one of the highest rated series on FX TV. In this post, we’re going to talk about the bikes used by Jax Teller in the show.

Besides a gripping story line, the show is literally a haven for Harley Davidson lovers. It puts off a spectacular display of Harley Davidson motorcycles (2003 harley-davidson dyna super being my favorite). Almost all the characters in the series ride a customized Harley Davidson.

Did they really ride in Sons of Anarchy?

Kurt Sutter, the writer of the show wanted the series to be an authentic portrayal of the MC culture and for that he needed his actors to be able to ride their bikes. So basically all of the bike riding in the series is performed by the actors themselves.

Another wonderful thing about the show is that no bike is randomly ridden by any character, in fact Kurt Sutter has made sure that every motorcycle depicts the personality of the character riding it.

What motorcycles are used in Sons of Anarchy?

From Older Harley Davidson models to newer ones, you get to see the best of the high quality bikes. 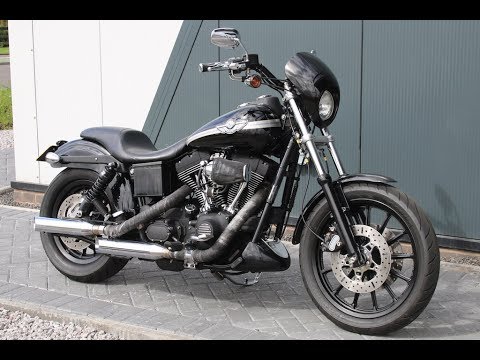 One of the shows most important characters Jax Teller, is played by actor Charlie Hunnam. He Portrays as the son of the founder of the SAMCRO, and at a time he too becomes the president of the club.

Charlie Hunnam is said to be the same in real life as his character in sons of anarchy Jax Teller. You can say that the highest effect of the show has been on him, as it ignited his love for motorcycles up to an extent that it became more than that of his on-screen character.

During the time Charlie Hunnam worked on the show He used to stay with bikers and wear plaid shorts while on his Harley-Davidson Dyna Super Glide Sport. He also rode back home with his co-stars from the set of SOA.

It is reported that he never used his car during the seven years of jax sons of anarchy, at least not that much. In one 2010 interview, he said that he had put only 350 miles on his car, while some staggering 8500 miles on his bike. Many times he was spotted on his bike riding through the roads of L.A.

Pictures of him riding through L.A clearly suggests that He rode the same bike as Jax Teller does in the sons of anarchy, Which is a customized Harley Davidson Dyna Super Glide Sport.

According to Charlie Hunnam, the Dyna is the fastest Harley Davidson, perfect for outlaw Motorcyclists as they can ride it aggressively.

The bike is believed to be the first custom made Harley Davidson – the 2003 Harley-Davidson Dyna Super glide sport.

One other reason for him riding the Dyna as quoted by him is” there’s no better bike out there”. He loved the bike so much that he admitted stealing it from the sets!

Charlie Hunnam also stated that he never uses that bike and keeps it as a trophy and reminder of his time as Jax Teller.

The 2003 Harley-Davidson Dyna Super Glide Sport was modified. Both the front fairing and the ape hangers were custom made and aftermarket.

The original dyna super glide comes with a V-twin 4 stroke engine. The engine displacement is 1449cc. It is powder coated in black. The torque is 78.2 ft lbs. The tank of the bike has a 4.9 gallon fuel capacity and 95.3 x 10.6mm bore/stroke ratio. It weighs around 660 lbs. The model supports an electric start.

There is also a Samcro reaper graphic on the fuel tank to show that Jax Teller – Charlie Hunnam is the president of the club. 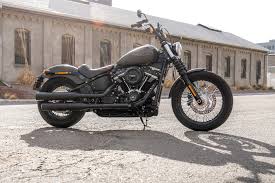 Throughout the series Sons of Anarchy Jax Teller rides more than one model of Harley Davidson, particularly when his first love 2003 Harley-Davidson Dyna Super Glide Sport was blown up. This was in the 8th episode of the 5th season. According to some viewers it was a Harley Street Bob. 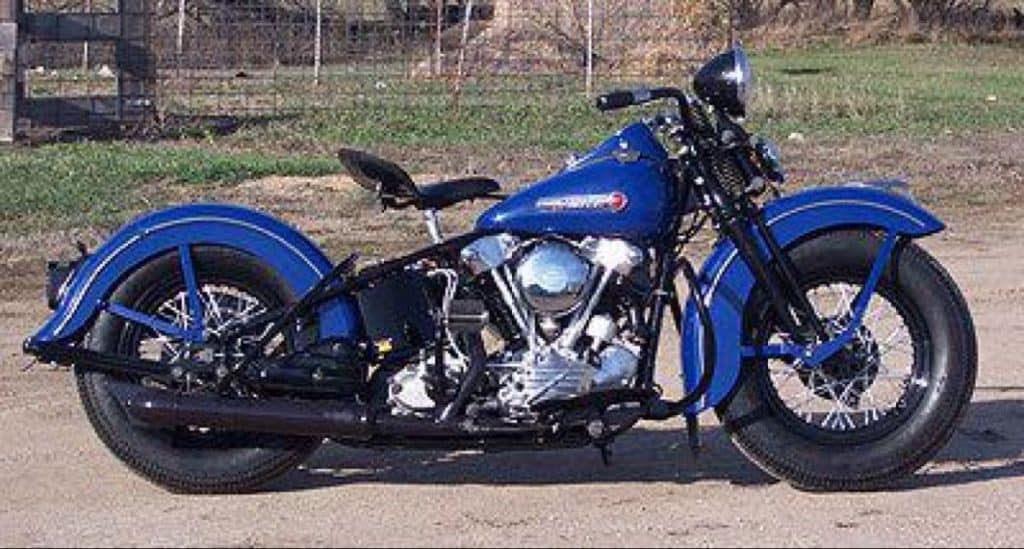 There is yet another bike that Jax Teller rides in the final season of Sons of Anarchy. It was a 1946 Harley Davidson with a customized EL knucklehead, that belonged to his father John Teller.

It too has a V-twin four stroke with a 1208cc displacement engine. The top speed is 110 mph. The vehicle is a kickstart and chain driven and weighs approximately 560 lbs.

The knucklehead sports a deep sky blue color similar to the club’s color, but there are no SAMCRO markings on the bike, not even the Reaper.

The vintage knucklehead appears last in the 7th season, where Jax rides in the sunset. The bike sports many different parts from different models. The frame is an original 48 panhead frame. The gas tanks are from 51 panhead. The front end is taken from the 46 knucklehead.

The crew created a double of the knucklehead by using a 2013 Harley Softail. It was a close match to the original version. Jax rides this replica in the scene where he crashes into the truck. They had taken out all the modern equipment and accessories. After the show ended it is reported to have been auctioned at 75000$.

Fans also observed that just in the final season he rode two bikes. 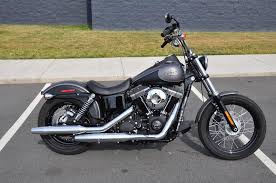 One great thing about Dyna’s is that it isn’t too heavy and clumsy like others. The character Half Sack played by actor Johnny Lewis rides a White Harley Davidson Dyna. Alike him this bike didn’t fit in with the club. The white color made it stand out and immediately be noticed. 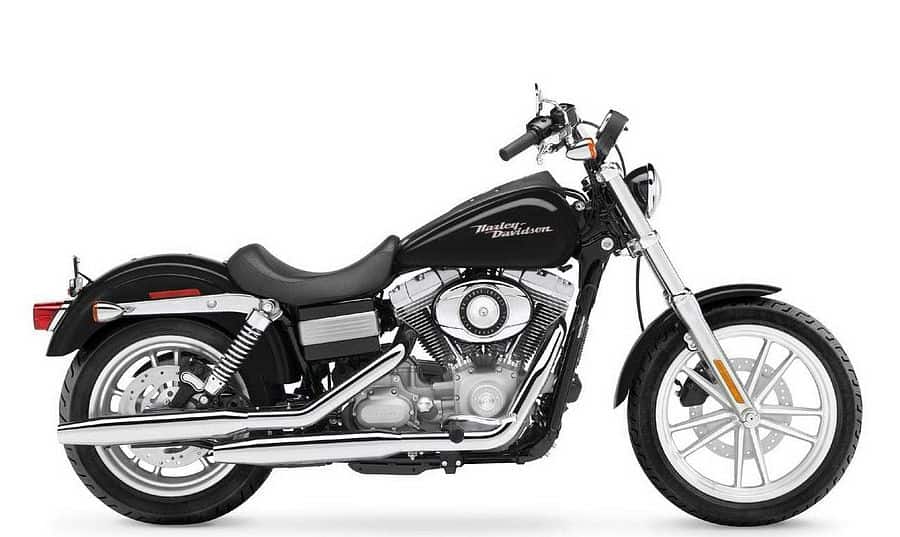 This bike is ridden by the character Clay, who is shown as the club’s president in the initial seasons. The vehicle has a twin cam 96, pushrod V –twin engine and 1584 cc engine displacement. It comes with a 4.8 gallon fuel capacity and 92 ft-lb torque. The bike also sports custom T bars and a forward facing canon air filter. 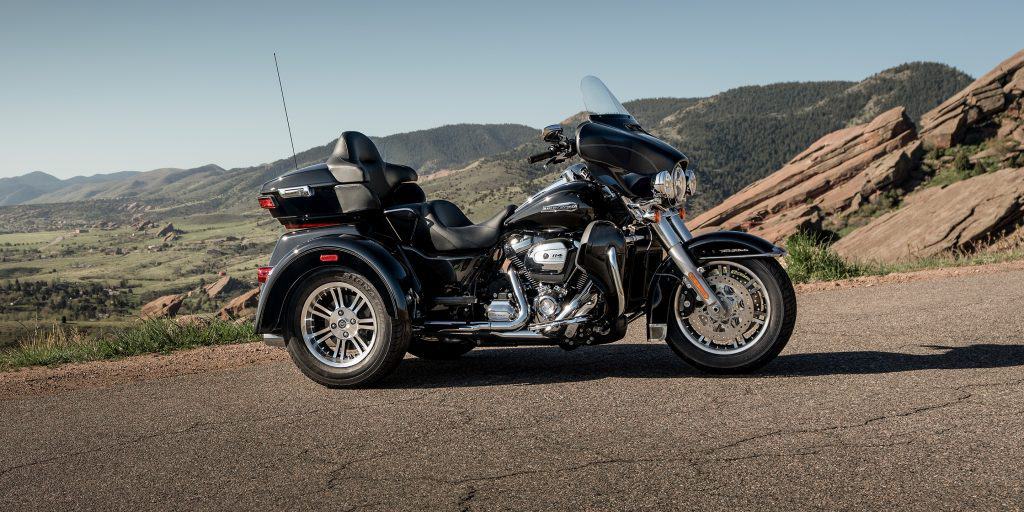 This motorcycle was used by the elderly and sick Piney. As the name suggests, the bike comes with 3 wheels and features an air cooled twin cam 103 valves pushrod operated engine. The torque is 101 ft-lb and comes with a 6 gallon fuel capacity. It has a 6 speed transmission and overhead valves with hydraulic, self-adjusting lifters with two valves per cylinder. The bike had a special holster attached on the side to carry his oxygen canisters along with an oxygen mask attached to the tank. 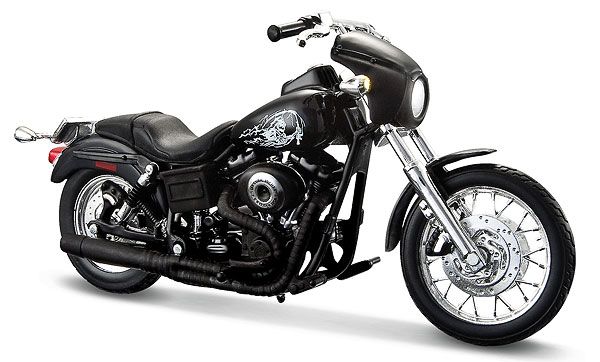 One of Jax Teller’s best friends on screen Opie, rides a similar bike as Jax, the 2003 Harley Davidson Super Glide Sport. Opie’s bike has a black on black twin cam 88 engine and a triple disc brake. It also has a premium adjustable sport suspension. The seating is low slung and aggressive. The speedometer and tachometer are mounted on the top. The rear tires are 150 mm wide. The bike also has the SOA logo on the tank 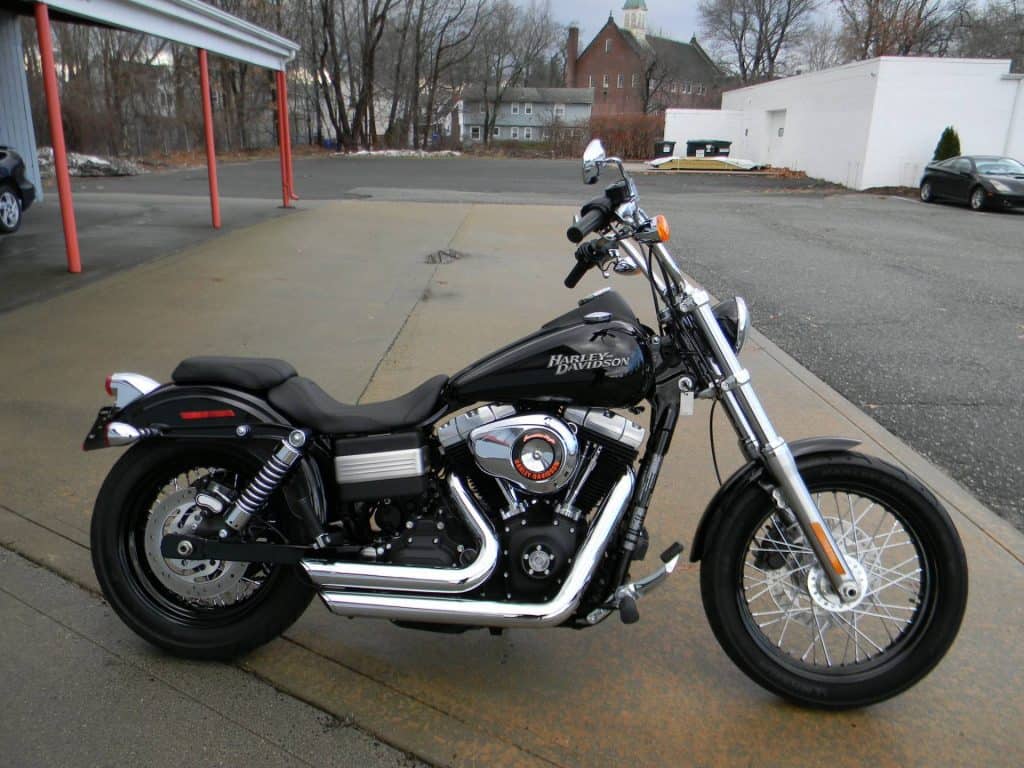 Just like Jax Teller, this bike is used by the character Chibs. But unlike others his bike does not have a front fairing. Chibs portrays as the vice president of the club. The bike sports a matte black look with Z bars with risers. This look is enhanced by the SOA symbol on the tank. The bike hints at Chibs scottish root as there is a small Saint Andrew’s cross on the saddle. 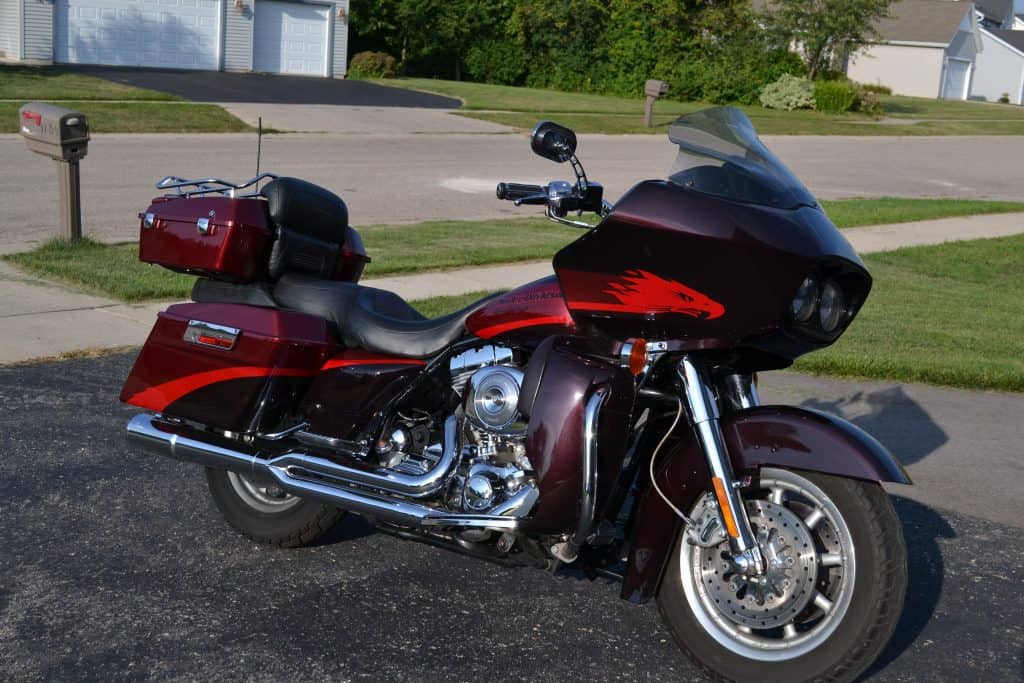 The performance of the bike is very high. It has a dual bending valve front suspension and emulsion rear suspension. The bike also boasts of a factory installed d21’ front wheel and a unique exhaust finish.

The only bikes to stand apart are Bobby’s custom made chopper and Linc’s 70’s Triumph Bonneville.

Bobby’s chopper is built on a hard frame and has mini ape hangers. The bike uses an evolution engine and runs on an open belt primary drive. The bike doesn’t have a front fairing. The bikes’ wheels have been laced. And the front springer forks have been raked to give it a chopper like look.

On the other hand, Linc rides a 70’s triumph Bonneville. It is a british bike that comes with a parallel twin four stroke engine. Linc’s Bonneville is painted green.

Tig is one of the most ruthless characters in the club. His bike, the 2006 Harley Davidson Dyna Street Bob, is painted matte black and has an air cooled V-Twin four stroke engine. This is one of the most popular bikes in the series. The engine displacement is 1450cc. The torque is 85 ft-lb and the fuel capacity is 4.7 gallon. The bike uses a 6 speed transmission. It has a bore stroke ratio of 95.18 x 101.52mm. The tank is adorned with the SOA logo. There are several spikes and skulls in the bike giving it a look more suited to his personality. 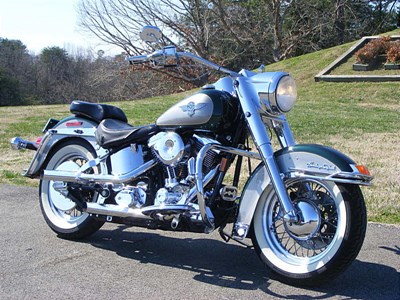 SAMCRO’s rivals the Mayan’s also get to ride a number of great bikes like the Harley-Davidson Heritage Softail.

The bike has a mix of orange and black color; it comes with a powerful engine and has a torque of 109 ft-lb. The engine is 1340 evo. A separate spin-0ff series about the Mayans, started after the conclusion of Sons of Anarchy. Alike SOA the Mayans also had its fair share of Bikes and Sons.

The president of the Mayans, Marcus Alvarez rides a bike fit for the president. A Harley Davidson Road King custom painted in green. One of the admirable features of this bike is its Milwaukee 8 V-twin engine and 111 ft –lb of torque.

With a wonderful display of acting alongside a spectacular showcase of a vast array of one of the finest motorcycles out there, Sons of Anarchy will surely keep you wanting for more of both. We actually wrote in-depth about the Road King vs the Street Glide in this article here.

The final season of the show was premiered in 2014. It was subjected to a lot of audience and critic responses and till date remains as one of the most viewed season. Some of the spectacular bikes are seen in the final season – marking the end of the production.

However, Jax is seen mostly in prison – so he is not one of the sons of anarchy taking lead on the back of bikes. He is mostly playing a good hero role – trying to end the club’s activities on a positive note.

The thirteenth (last) episode of the final season “Papa’s Goods” – was viewed by 6.5 million audiences – making it the most viewed episode. Jax settles all the dues by eliminating all the lose ends – and fulfills his father’s legacy as the Sons of Anarchy finally rests.