“We are Durban Bikes – a global company that believes our collapsible bikes make it easier for people to live healthy, active lifestyles.”
Reported by Businesswire – Durban Bikes Words.

Durban Bikes is one of the fastest growing folding bicycle manufacturer. The company is based in Brazil and is known to produce some of the best low cost budgeted folding bikes. Durban Bikes are known for high tech engineering, minimalist design and innovative folding mechanisms.

Recognized as a leader in the South American Folding bike market – Urban Bikes creates some of the best folding bikes at an affordable price point. Their leading models include Durban Bay Up, Durban Street and Durban Adult One.

Until recently Durban Bikes were only available online for US and Canadian consumers. In 2016 they announced their entrance into the US market with retail giants Target and Sports Authority through distribution deals.

Momentum Magazines reports that this distribution deal is will be beneficial to both – Durban Bikes and US citizens as USA is one of the fastest-growing segments for folding bikes market.

“It’s incredible how they’ve been received here,” said Jessica Runck, the Director of Business Operations for Durban Bikes. “We weren’t expecting such immediate growth and it’s been wonderful.”

Durban Bikes’ shares rose to an all time high recently – as a result of their focus on designing stylish, technically innovative bikes. Dahon Bikes showcases – a much wider range of bike styles than is typically expected of a folding bike.

Durban Adult One is an example of a low cost Urban Bike. The bike is best for college goers and riding it to office. You cannot expect it for riding on gravel and going up hills.

For commuting on the beach, or riding in off city limits their range includes bikes like Durban Street. These are heavy duty bikes which can almost comes at par with mountain bikes genre. But both the range – Urban Bike and Mountain Bikes are no where in the comparison to other Bikes when talking about their costs.

Other than the costing – Durban Bikes have drawn a lot of attention for their time effective folding mechanism. Durban Bikes are collapsible in 15 seconds. And USA wants this feature prominently in folding bikes.

In heavy traffics and multi modal transport system a fast folding bike is the best option to be brought on public transit. And small folded dimensions make storing the bikes easy in limited spaces especially in small urban apartments.

Below we have reviewed two of the best sellers form Durban Bikes. These two have a huge consumer base and a lot of positive comments. These 2 Best Durban Bikes are known for their design and most importantly their user friendly experience. They are: 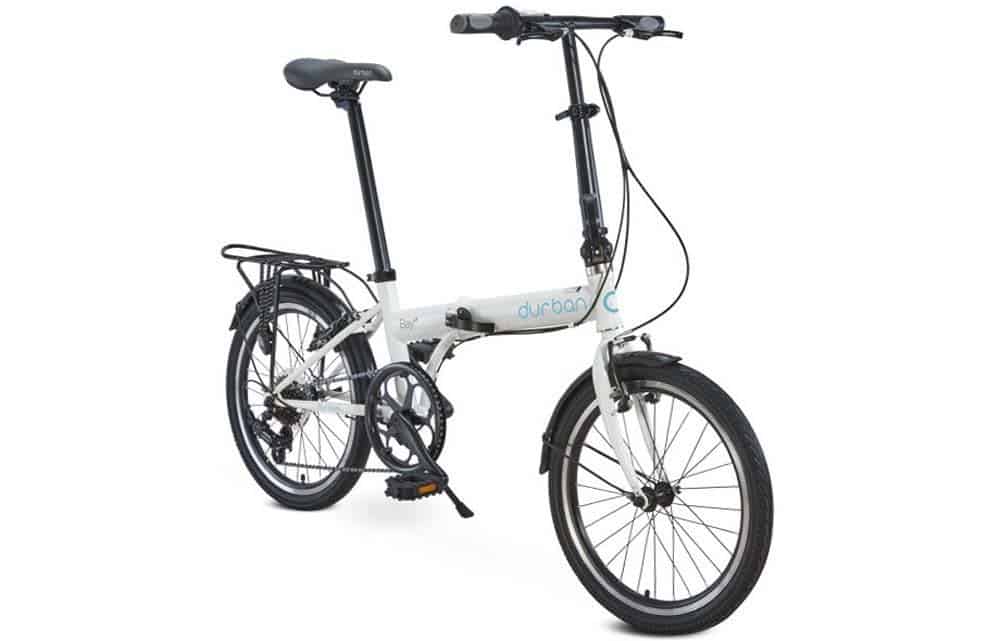 Durban Bay Up is an economic Durban Bike – especially designed for Urban Commuting. Weighing just 31 lbs and priced less than 250 dollars – the bike is one of the favorite Durban Bikes and one of the most bought ones.

If you need a folding bike mostly to ride it within city limits and for multi-modal commuting than – premium materials are not the need. You need a low-budget folding bicycle and Durban Bay Up fulfills the exact need.

We at convenientcommuting.com has done a part to part inspection of Durban Bay Up at our garage. Let us provide you an in length review of this Durban Bike.

Material and Built of Durban Bay Up

The price of the bike is severely reduced because aluminum costs much more than steel. However there is a low to this – it makes the buy a little bulky.

Anodized steel frames used in Durban Bikes like Durban Bay 6 makes the bike very bulky. But you don’t need to worry about High Tensile steel frames if you are looking forward to carry Durban Bay Up.

These latches make folding mechanism of Durban Folding Bikes very easy. You just have to pull a latch and the bike gets folded into half. The most important thing to look in a latch is its strength.

Weak Latches are a pain. And replacing them over and over makes your experience very inconvenient. The best thing about Durban Bikes – is strong latches. You can fold and unfold the bikes several times – but the latches will not be affected.

Durban Bay Up includes 20″ alloy rims with 201.5 tires and UCP spokes. These are suitable for float roads.Within the city on hard macadam roads – the tires will move very smooth.

However with Durban Bay Up you will find it hard to go up the hills and overcome other types of challenges on your way as these are not wide tires either.

The Brakes are premium Alloy V-brake with Alloy brake leavers too. Looking at the tires the brakes are pretty well advanced and will give your biking an edge specially in heavy traffic zones. This shows that Durban Bikes have compromised on unnecessary features but the needy ones are the best premium quality ones.

Durban Bay Up folding bike has the following speed shifters:

The FT-35 has 7 speeds. In a bike which costs less than 250 dollars this is highly unusual. Secondly as we talked earlier that although the tires are not aptly suitable for mountain climbing and hill riding – the 7 speed shifters can definitely boost your ride in all these terrains.

So basically if you upgrade the tires in this Urban Bike – Durban Bay Up can definitely become an all terrain bike.

Durban Bay Up is an easy to fold/unfold bike. The folding/unfolding mechanism is very simple. On average, it takes a cyclist no longer than 15 seconds to unfold the bike and make it road ready and vice versa. The folded dimensions of Durban Bay up are a mere 26″ x 13″ x 31″.

There are three simple steps to fold the bike. Every simple requires an average 5 seconds. Firstly open the latch and the bike will be halved of its standing dimensions – with two tires meeting in the middle. Secondly scroll down the seat by simply pushing it down the levers. Finally invert the handlebars and kick stands.

Durban Bikes target its customers by advertising their efficient and simple folding mechanism. Their bikes are one of the fastest folding/unfolding bicycles in the world.

We at convenientcommuting.com have not reviewed any bikes which are more economical than Durban Bikes. Although Dahon Bikes, Shwinn Bikes, Euromini Campo are some of the best budgeted folding bikes – but none can come close to a Durban Bike.

Durban Bay Up is a budget friendly bike. The bike costs less than 250 dollars on Amazon. And considering the quality, built and engineering the bike is worth all the dollars. 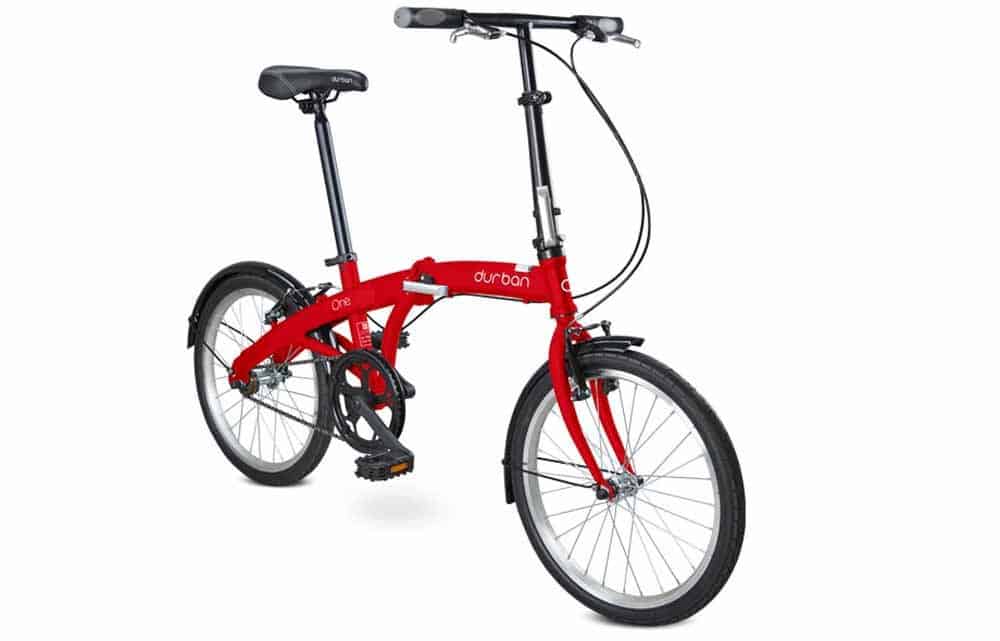 The second among the most economically popular Durban Bikes is the – Adult One Folding Bike.

Adult One Folding Bike is a single gear bike. Durban Bikes describes this as – “One gear, one thousand possibilities”. Before we go deep into its in length review there are some general things you need to know.

This single speed folding bike is designed as a recreational riding bike. You cannot expect much from it. However the design and building mechanism are at par – in comparison to other less than 200 dollars bikes. Although it never stands close to the Durban Bay Up. (Coming to this in the in length review).

Considering the dollars that you are going to spend on Adult One – it is advisable for you to get the Durban Bay Up – in almost the same price.

Durban Bikes has put up a decent show launching Adult One. It showcases a very sleek and convenient frame. This does not give it a very powerful macho image. However folding bikes never feature bulky frames like other mountain bikes – but Adult One’s frame looks cheeky in front of other folding bikes as well.

The frame is made up of high-tensile anodized steel. And looking at the size of the frame the bike is not very light as well. Adult One weighs 29 lbs which is a bit heavy considering its simple built without a Derailleur and Speed Shifters.

Adult One’s other key characters in its built include a KMC chain, an adjustable handlebar system, 48T Steel Crankset and folding pedals with reflectors. These are some of the features which are available in Durban Bay Up as well.

Durban Bikes has put decent tires and brakes in the Adult One model. The bike comes installed with V-brakes and an Alloy Brake Lever. V Brakes provide great stopping power and levers protect the brakes from falling apart and ensures smooth functioning.

However the wheels are not that great. Adult One comes with 20″ Alloy Rims / 20×1.5 Tires / UCP Spokes. The tires will not support hill climbing and up hill riding. Moreover these are not Kenda Tires which are generally used in good folding bikes.

The wheels and tires are same as in Durban Bay Up. In Durban Bay Up it is possible to replace the tires with some sturdy strong ones as the rims will support them. And Bay Up is a 7 speed bike. So because of this you can use a Bay Up in all kinds of terrains.

But Adult One is a single speed bike. So even if you change the tires (which technically you can) – you will never be able to convert it into a mountain bike types.

Adult One does not come with a Derailleur either! No speeds shifters and No Derailleur – makes Adult One best for flat roads. It is strictly an Urban Bike.

Secondly this bike is best as a childhood bike (big child though) or as a female bike. The name is Adult One – but the bike is actually a beginner model. The weight, color and delicate frame actually makes it one of the best folding bikes for women than men.

As we reviewed Durban Bay Up – we discussed that Durban Bikes are known for their folding mechanism and technological advancement in producing some of the best folding bikes.

Adult One lives up to the standards of Durban Bikes folding mechanism. You can fold and unfold the bike precisely in 15 seconds. Some websites claim that Adult One does not fold/unfold in the advertised time – but we already have experimented this ourselves in our garage. So rest assured Adult One is not going to pain you in folding/unfolding.

This actually makes Adult One good for multi modal commuting. The bike uses a B Type Latch to get fold/unfold. You need to pull the latch and the bike gets halved. The folded Adult One is 6″ x 13″ x 31″ (66 x 33 x 80cm).

Bay Up has a C Type Latch. But Adult One has a B Type Latch. Although good but B Type latches are not that technically robust than the C Ones. But then too – with the Durban One folded dimensions it wouldn’t be difficult for you to travel by bus, train, subway, or any other public transport.

The bike does not have all the premium features like its predecessor Durban Bay Up. And paying around 200 dollars seems a bit more. You can get good bikes under 200 dollars having quality parts and more importantly more speeds. Read our reviews on Euromini Campo and Sondors Fold.

Buy Durban Adult One Folding Bike if you:

Check prices and ratings on Amazon