We have titled Columba Folding Bike as a great folding bike because the bike has lived up to this title. There are many good folding bikes, in the market and to become a great one – you need to be more than just good. 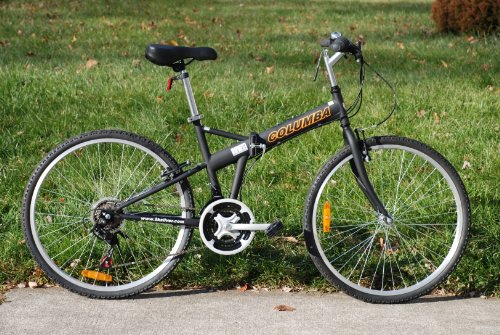 What separates Columba Folding Bike from other good bikes or best bikes.

A great bike has all these features – and what makes it become a legend – is the quality of its parts and meticulous calculations in its making. Because of which a great bike will have a very very long life.

The dominance of Columba SP26S as a portable folding bike is very surprising. 2KSilver – the bikes manufacturer has sold thousands of SP26S’s pieces and still the bike is available on several online platforms, including Amazon. Because of this bike – the Columba SP26S – overall Columba Bikes sales boosted – and this model became like an advertisement runner for Columba Bikes.

We have analysed 5 reasons – which make this Columba folding bike and other Columba Bikes still rule the folding bikes market.

Getting a Great Bike which can be folded – for around 225 dollars – does mean that it is a best bike for the money. We reviewed one of the Columba Bicycles fan – who has this Columba SP26S – and he gave some surprising statistics.

He purchased the bike SP26S for 250 dollars (with accessories) and is using it since last 3 years and some months. The total days of his use of Columba 26″ SP26S happens to be 1000. So till now the per day cost of the bike comes at less than a quarter dollar! And still the bike is in pretty good condition and can serve him for at least a 1000 days more.

What actually makes this bike very very cheap is its long usage. There might be several good bikes which you can get in less than 200 dollars – as more consumers want cheap bikes. But they don’t last as long. The maximum validity of a less than 300 dollar bike is 2 years or 500 days. Columba 26″ SP26S – lasts four times more – than a 300 dollar bike.

And hence your per day investment on this bike gets severely reduced. This is what makes Columba Folding Bike – a long term investment bike.

Main body or the frame of the bike is constructed with stainless steel – and mostly smaller parts are also good quality steel. Even the kick stand is made up of steel. Use of plastic is not observed in this bike – which is ordinary in other cheap bikes and some of the low quality ones.

2KSilver has used branded Kenda 26 inches tires and wheels. The bikes performed very well even on some rough terrains. Remember that this is not a folding mountain bike – and hence cannot with stand too much of rocky and hilly surfaces. The tires and the bikes can last long if run on roads and for city commute.

The bike features quick removable front handle stem and an adjustable seat. The adjusting mechanism is simple and even several adjustments do not affect the rods and bolts.

Rusting of the external and internal parts was also not observed. Even the bolts and smaller levers function pretty well even under heavy use.

Honestly speaking – if you are looking for a folding mountain bike – or a bike with fat tires – for mountain and difficult terrain riding – than this in not the bike for you.

This bike is ranked high in best folding bikes category – and hence its folding mechanism is praiseworthy.

Columba SP26S can be folded within 10 – 15 seconds. The folding mechanism required just three actions and you get the bike’s size reduced to on third!

And its not just ease of the folding mechanism that fascinated us. Parts encounters a lot of friction when moving over one another and this can lead to abrasion. But in Columba Bikes this is not as issue.

The parts are not exposed to abrasion or wearing out because of a lot of folds.

The bike has lesser folds as compared to other folding bikes. More the folds – more the risk of parts getting dislocated. Lesser the folds – the parts are more protected.

Even the installation of Columba SP26S is not time consuming. The bike is shipped without the front wheel for safety reasons. Consumers need to install it after delivery.

The installation is very simple and does not require any manual. There are two holes and a lock – in which the front wheel is installed. It hardly takes 5 minutes to install the front wheel on the 26 inches folding bike.

However we recommend that you use the user manual which come with the bike for detailed description before installing the wheel or any other spare parts.

One of the most fascinating features about any Columba Bikes is their portability. 2KSilver makes sure that they manufacture some of the best portable bikes. In fact their marketing campaign is focused on producing portable bikes like no other manufacturer.

And Columba Folding Bike SP26S is no exception. The bike weighs only 33 lbs – making it one of the lightest folding bikes in the world. The shipping weight is around 43 lbs – which is half of some of the heavy folding bikes!

You can easily store SP26S even in compact and smaller car’s trunks. Even a Honda Civic, or Toyota Prius can easily accommodate this Columba Folding Bike.

Because of its portability even multi-modal commuting becomes easy with a SP26S being your companion. If your journey requires several modes of commute then carrying this Columba Folding Bike is very convenient. You can carry it easily inside buses and trains and sometimes even on flights!

Because of all the above discussed reasons – Columba SP26S has a universal consumer demand. It is very popular among office goers and even youngsters. Some even use this bike for recreational rides for example riding in parks or while camping.

SP26S has an adjustable seat which again makes it universally accepted among average and tall height riders. 5’3″ – 6’0″ is the recommended height for riding this bike. People whose height is 5’10” – 6’2″ may need to buy a longer seat post which is easily available on online platforms like Amazon.

The bike’s built makes it equally popular in males and females. It is one of the best folding bikes for women. This Columba Folding Bike is available in Black, Brown and Purple color – with purple SP26S being the preferred choice among women.

It is even popular as lightweight folding bike – for women. Despite of being lightweight – it supports a maximum weight of 200 lbs.

Columba Bikes are sold by a US based company – 2KSilver. The company operates from New Jersey and manufacture some of Columba Bikes parts locally. However most of the parts are bulk manufactured in China according to some sources.

Because of Chinese manufacturing some analysts question the quality of Columba Bikes. We at convenientcommtin.com inspected some of the popular Columba Bikes – including the Columba SP26S – and did not find any severe issues. 2KSilver – are quite quality conscious for the bike parts they import from overseas.

However there are certain bikes – like Dahon Bikes’ popular Dahon Jack D7 – and a stowabike from the famous manufacturer stowabikes – which are very popular in the best bikes under 300 category. And Dahon and Brompton are quality bike manufacturers – still Columba SP26S makes it way on the top.

To be honest – not all Columba Bikes can compete with a Brompton or a Dahon – but the one which we are reviewing here – Columba Folding Bike 26 SP26S – definitely gives these bikes a heavy competition.

So without doubt buying a Columba Folding Bike 26 is worth your dollars and you are no where compromising on quality.