Some of the links on this site are Amazon affiliate links. If you click on them and make a purchase, we may earn a small commission at no extra cost to you. Thank you for your continued support!

Smartphones are so much more than phones now – they’re also music players and navigation devices and have almost replaced vehicle stereos and GPS units.

It’s no surprise then that you see a lot of cars with phone mounts on the windshield or dashboard. If you’re a biker, though, you’ll find that there are also plenty of great phone mounts available for motorcycles, too.

On most bikes, the phone will mount right onto the handlebars, much like a GPS would. This allows you to easily see the display without having to take your eyes off the road to see directions.

You can also quickly fire up a playlist to listen to your favorite music. Coupled with a bluetooth helmet or bluetooth speakers, you’ll be completely set.

Taking your eyes off the road for even a second can be extremely dangerous, especially at high speeds and on a bike.

PLEASE be careful when you operate your phone from your bike. Always change settings, navigation, and music when you’re stopped and NEVER when you’re moving.

Not only will you be saving your own life, you’ll also prevent anyone else from being affected.

PLEASE USE SMARTPHONES RESPONSIBLY WHEN RIDING. 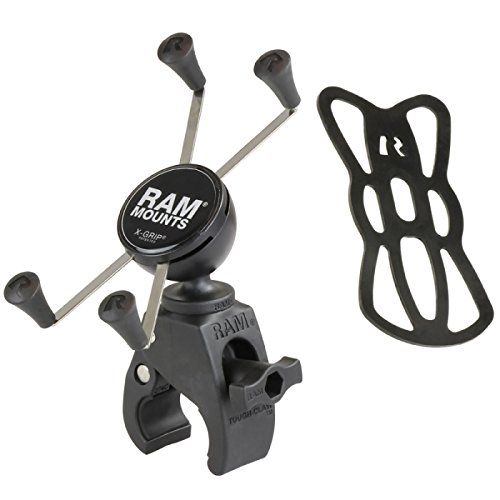 RAM mounts are the industry leaders in manufacturing high quality and durable mounts for all sorts of equipment, so it’s no surprise that they are our number one choice for motorcycle phone mounts as well.

The Tough Claw mount has a rather unique design – the phone grip is shaped like an X which can then be adjusted around your phone. The X design gives a sturdy grip on your phone so it does not come loose(who wants to drop their phone from a bike, right!)

Additionally, it allows for the tightest grip and the least compromise in visibility.

The X grip is mounted on a ball and socket joint that gives you 360 degrees of movement in almost all directions. You can rotate this bad boy any which you way want, giving you complete control and letting you find that angle that sits just right.

RAM Mounts are all made from very durable materials and they’re built to last. Even though the price is a bit on the higher side, it’s worth the investment, especially considering that you’re probably mounting a $500+ phone.

It’s quite generously sized and can thus fit fairly beefy phones, too. 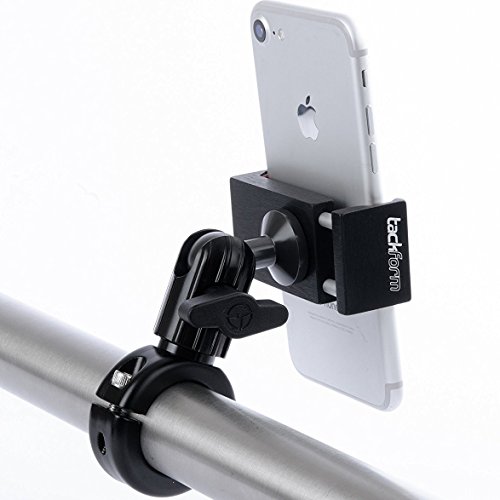 Just when you thought there could be no competitor to the durability and quality of the RAM mount, may we present the Tackform mount.

Made with industrial-grade materials, the Tackform uses an industrial spring mechanism to firmly grip your phone. It expands quite a bit so you can fit rather wide phones on it, too, up to 3.25 inches. This includes the larger iPhones and Samsung Galaxy devices.

The phone perches on a 360 degree swivel which is then connected to an adjustable clamp that fits pretty much all handlebars. If your diameter is 1.25″, you can directly mount it, otherwise, there are bushings included which you can use to mount it to a bigger handlebar.

The whole mount is made from 6061 aluminum which is both very light and very strong. People have said they’ve crashed their bikes and the phone was still secure in the mount!

Additionally, you can pop the phone in and out of the grip with just one hand.

The 360 degree swivel means you can view it in portrait, landscape, or anything in between, and you can also mount it vertically on a pipe if you wish to use it somewhere else.

Like the RAM mount, this mount is expensive but well worth the money. 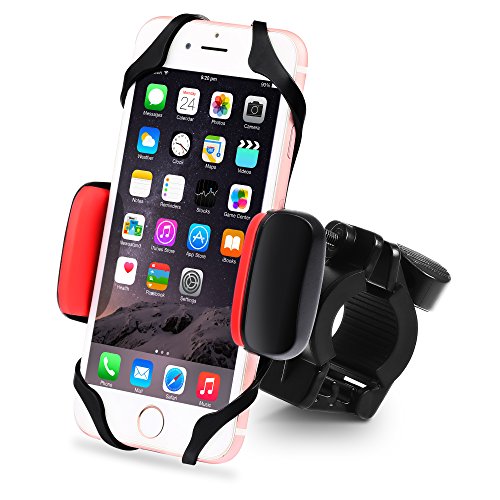 Compared to the two models we’ve looked at above, the Yoassi mount is much cheaper. This is probably because it’s a generic brand, but don’t let that fool you. It’s still a well-thought out and sturdy design.

Let’s start from the bottom up. It’s a two piece design, with the base and stem made of a zinc alloy(so basically metal, which is good), and the actual phone mount is made from ABS, which is a tough plastic.

The manufacturer touts the metal stem as being a key feature, since plastic stems are the thinnest points in any mounts and the most prone to breaking on impact.

Not only that but plastic tends to degrade with prolonged exposure to sunlight, so the less plastic on the delicate parts, the better.

This mount can rotate 360 degrees for a fully customizable viewing angle.

The clamp has two very thick silicone paddings, which look a little ridiculous but they do a great job of really holding on to your phone snugly and making sure it doesn’t go anywhere!

It can fit phones up to 3.7″ wide, which I feel is just showing off and attempting to one-up the other guys! Still, it seems that if you have an unusually wide phone, this is the mount for you.

Yoassi provides a 12 month warranty, but it only covers the mount, not your phone ;). 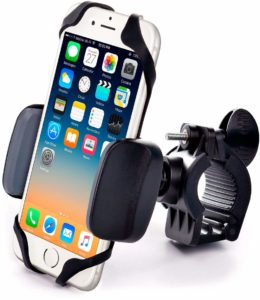 Much like the Yoassi mount seen above, the CAW.CAR mount is quite similar in terms of design and compatibility.

Of course, in the spirit of one-upmanship, these guys decided to make their mount compatible with handlebars from 0.6" to 1.3"(compared to 1.2" on the Yoassi mount).

In the metal-plastic version, the bottom part is metal and the phone mount is plastic. The phone mount can house phones up to 3.7" wide.

This one doesn't have quite as much of a padding for the phone as the above one does, but the rubber grips are still quite sufficient to hold the phone in place.

You'll get 360 degrees of movement, of course, so you can position the mount in any way you wish. 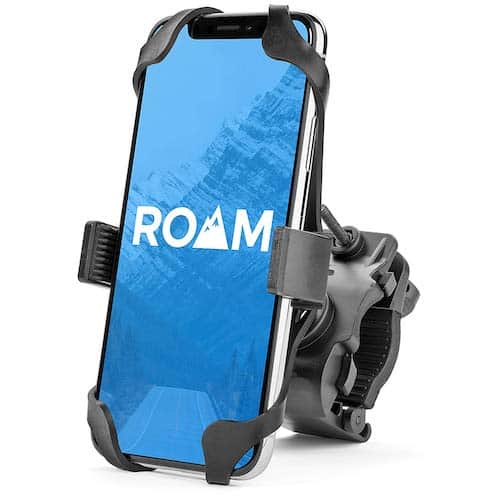 The ROAM Universal mount is designed more for bicycles, I feel, rather than motorcycles, since it is made entirely out of plastic.

However, it still feels really sturdy and considering it was the most decent cheap offering we found, we decided to include it in this list.

This is a universal phone mount, which means it will fit phones up to 3.5" wide. Most smartphones available today fall under this category, so there's no need to worry!

The mount will clamp onto handlebars with diameters between 7/8" to 1 1/4". This is quite standard and will not be a problem for the majority of bikes.

Even though it's plastic, to compensate, the manufacturers offer a lifetime warranty on the product. Even if you do somehow manage to break it, you can get a replacement for free.